We don’t talk about Bruno, but Disney is giving the music business something else to talk about: its impressive new share of the market. As 2022 got underway, the soundtrack to Encanto, the Disney film that was released over the holiday season, saw its Lin-Manuel Miranda-penned collection of songs become the biggest album of the year so far in the first quarter stemming from Dec. 31, 2021 through March 31, 2022.

The success of the soundtrack — the first album of 2022 to pass 1 million equivalent album units, according to Luminate, formerly MRC Data — has had a tangible effect on the market share rankings for Q1, as the Disney Music Group surged into the top 10 of overall market share, the most significant of several moves atop the rankings compared to Q1 last year.

Interscope/Geffen/A&M maintained its spot atop the rankings for the first quarter of 2022, coming in at 9.76% and fending off a charge from No. 2 Atlantic, which closed the gap with a 9.49% share, up from 9.22% in the same period last year. They are the clear front-runners so far this year, as 11 of the top 12 labels ceded at least some measure of overall market share points over the same period in 2021, while several other companies — 300 Entertainment, Alamo Records and Disney most notably — surged to big starts in 2022. 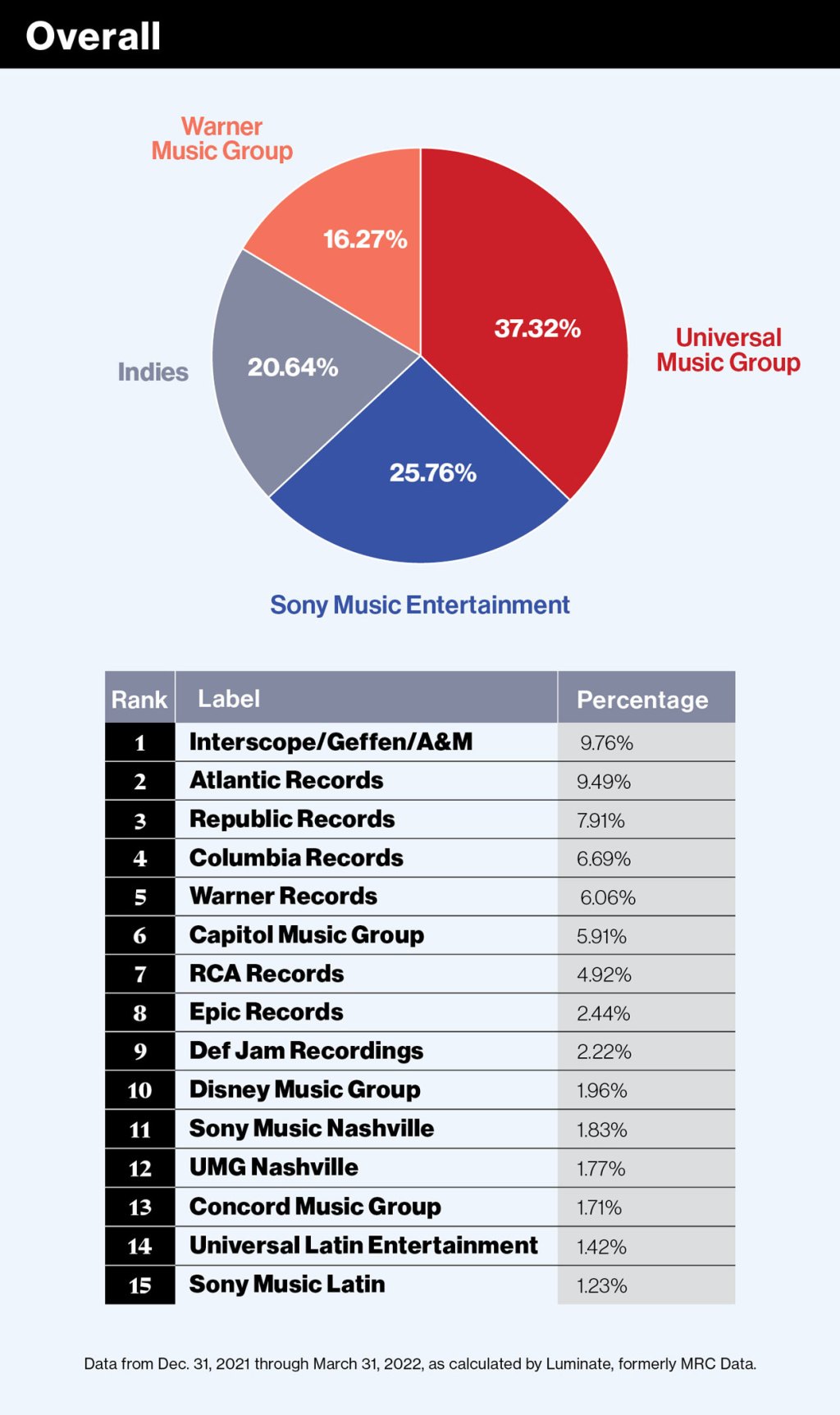 Those boosts were not enough to upend the established order, however. The same labels that ranked in the top nine in Q1 2021 remain, albeit in a slightly different order. Republic Records held on to its third-place position at 7.91%, down from the 8.51% it held in the first quarter of 2021, when Morgan Wallen’s Big Loud/Republic album Dangerous: The Double Album dominated the early part of the year. (It is still the third-biggest album of 2022 so far, though at slightly more than one-third the 1.4 million equivalent album units of the same period last year; Republic also has five of the top 10 albums this year to date.) Columbia Records (which includes indie distributor RED) and Warner Records (which includes catalog label Rhino, Warner Latin and the bulk of Warner Nashville) climbed to fourth and fifth, with market shares of 6.69% (from 6.79%) and 6.06% (from 6.32%), respectively, while Capitol Music Group slipped to sixth at 5.91%, down from the 6.98% it garnered in the first quarter of 2021, when it came in fourth.

The labels’ current market share — defined as audio album consumption releases that came out in the past 18 months (overall includes catalog performance) — is where the big early strides this year can be more clearly seen. Atlantic comes in at No. 1 in current market share, with 10.57% — more than 1.5 percentage points higher than Republic (8.93%) and IGA (8.91%) — on the strength of big albums from Kodak Black, YoungBoy Never Broke Again and the October 2021 album Equals from Ed Sheeran. Atlantic also benefited from a big first quarter from 300, which falls under the Atlantic umbrella alongside Elektra (0.81% current market share). 300 racked up a 2.11% current market share in Q1, good for ninth among all labels if it were broken out on its own, as Gunna’s album DS4EVER came in behind only Encanto as the second-biggest album of the year so far. 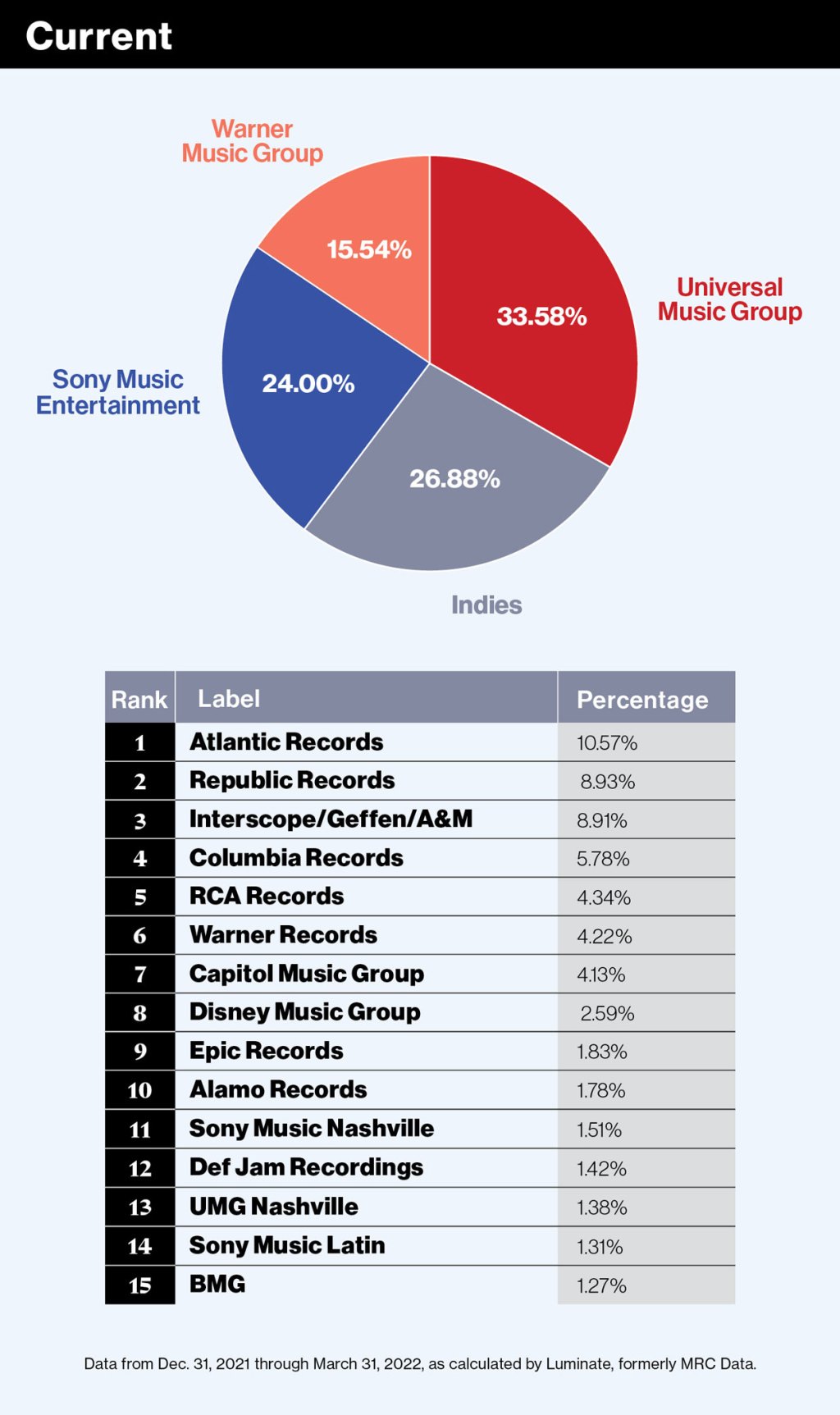 The flip side is that IGA and Republic have each dropped more than 2% in current market share from Q1 last year, when they were at 11.25% and 11.22%, respectively, due to the early-2021 success of their own artists and affiliated labels such as Big Loud (Republic) and Alamo (IGA), the latter of which shifted from UMG into a Sony frontline label in the middle of last year. (Republic also encompasses Island, Young Money and Cash Money, among others; IGA includes Verve.) IGA also kicked off last year with the smash debut of Olivia Rodrigo’s Geffen-released single, “drivers license,” which led to her Grammy night win for best new artist on April 3. The track’s parent album, SOUR, is still in this year’s top 10 biggest albums so far, as is Juice WRLD’s December posthumous release Fighting Demons.

Alamo — beginning what will be its first full year under Sony — finished the quarter with a current market share of 1.78%. That’s actually down from last year’s Q1 when it surged to 2.25% under the IGA umbrella on the strength of Lil Durk’s album The Voice, which had had three full months in the marketplace. But with the company having just released new Billboard 200-topping Lil Durk album 7220 in March, there’s plenty of room for that share to grow in Q2. Despite the drop, Alamo still finished eleventh in current market share, maintaining its ranking for the first quarter of 2021, when it was under the Interscope umbrella.

Other notable gains in current market share over last year include Sony Latin, which grew from 0.80% in Q1 2021 to a 1.31% share in 2022, and Concord, which jumped from 0.73% last year to a 1.16% current share this year, as big releases from Rauw Alejandro and Ghost, respectively, helped boost those companies.

Catalog market share — albums that are older than 18 months — hewed closely to overall market share in terms of rankings, with the top nine slots all staying the same and Interscope taking the top spot at 10.05%, likely buoyed by the cross-catalog boost that came in the wake of the Super Bowl Halftime Show, which featured a half-dozen artists who have released work on the label through the years. 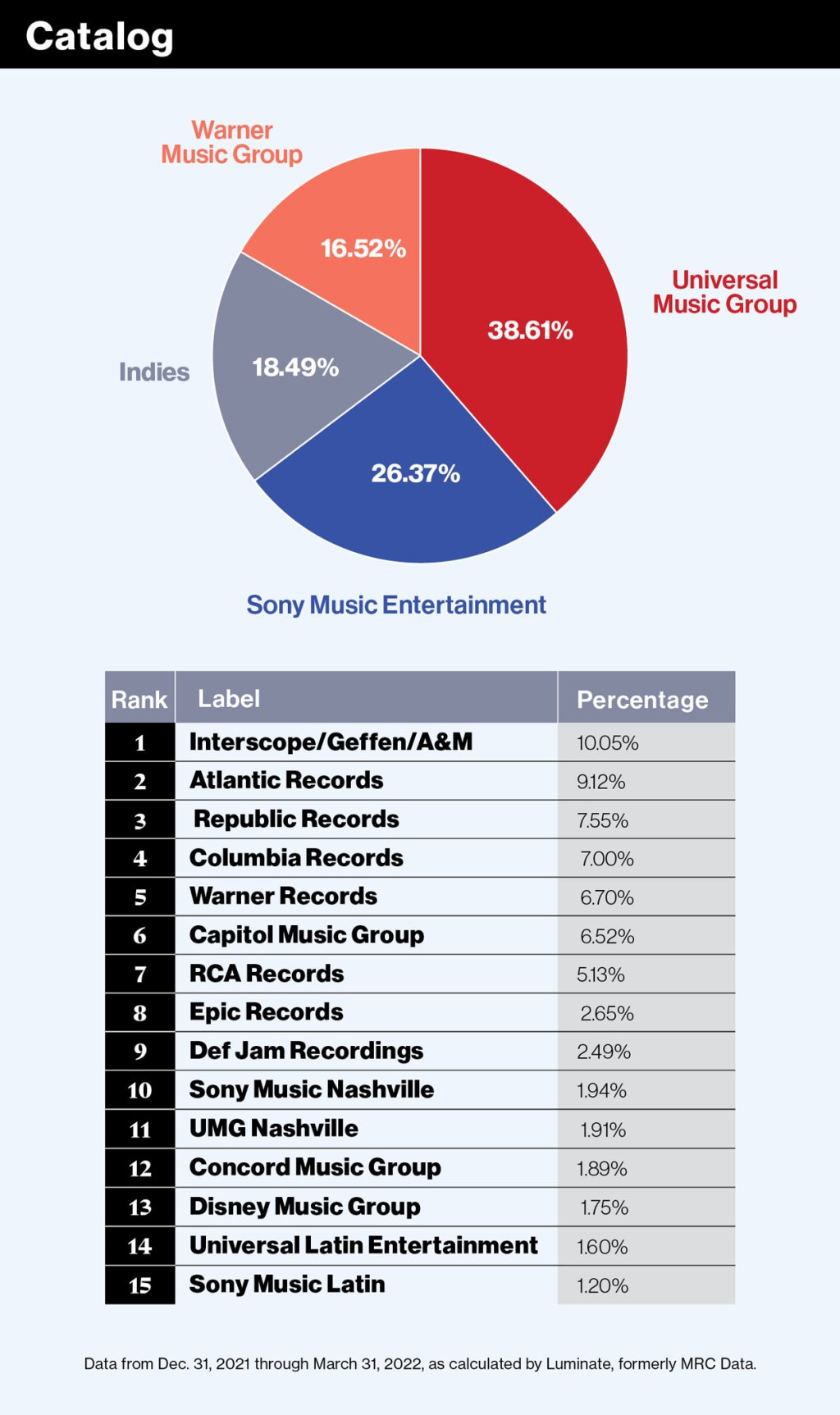 "Long before making 'Twin Heavy', I had always listened to funk, soul and R&B," said Healey